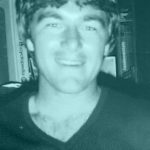 There are some truths that need telling.

And so I share this truth, one of many to come. This one is being told on behalf of Mike Anderson’s sister, the late Kathy Anderson who died in June 2018.

Like her older brother, Kathy had a mischievous side to her. And she missed Mike so, frequenting the cemetery where his ashes are buried. One day, she texted me this “SUPER BOWL XLIX” picture of his gravestone.

Let me back up and give this story a little context…

It was the Friday before Superbowl in 2015 and was to be Mike’s first Superbowl that he missed since his 2014 death. Hanna, Mike’s then 18-year-old daughter, was driving me to an appointment with Dorothy in downtown Seattle. On our way, I got a text from Kathy with a picture of a Superbowl sticker on Mike’s grave. She wrote that she visited the cemetery that day and left a Superbowl sticker for Mike, knowing how much her brother loved Superbowl. She stuck it on his grave right next to his name. And then she posted the picture to her Facebook page. It remains there to this day.

I laughed out loud when I saw that picture. I told Hanna about it and she howled too. Because it was just SO FITTING for Mike.

Hanna and I arrived at Dorothy’s office. And we told her how Kathy had gotten us to laugh. (We had been so sad over Mike’s death, so it was remarkable that Kathy made us laugh.) We laughed together because we were visualizing how Mike was probably laughing in heaven right along with us. Anyone who knows Mike, knows what a HUGE Seahawks and Superbowl fan he was.

Unfortunately, someone else saw the Seahawks sticker, apparently on Facebook, went to the cemetery, took photos of it with and without the sticker, then circulated those photos for over a year to police departments, attorneys, and Mike’s then 21 year-old daughter’s inbox.

Over the months and years that followed,  pictures of Mike’s gravestone continued to intermittently and REPEATEDLY arrive in the inbox of 21-year-old Kendra Anderson, estate executor, sent by this other individual and her attorneys. Those actions, clearly intended to harass and intimidate Kendra, were accompanied with accusations and false statements that Kendra and Hanna had “vandalized” and damaged their father’s gravestone with the sticker.

This individual, without one shred of evidence, falsely stated AS FACT to two police departments that Kendra and Hanna were the ones who had “deprecated” their father’s gravestone.

Of course, neither Kendra or Hanna placed the sticker on their dad’s gravestone. They have never even seen the gravestone in person. For reasons I’ll get into later, neither one can bear to look at their father’s gravestone. (They visit his spirit at Tiger Lake.)

With Kendra’s blessing, I screened her inbox for her and blocked those photos. She was innocent and oblivious to the degree of false accusations. She was unable to talk about her dad’s death for years, let alone look at pictures of his gravestone.

Kendra and Hanna never knew about all the aftermath of Kathy’s prank, or shall we say “gift” to her brother. I was horrified, however, over how my and Mike’s daughters were being targeted by another, even though proof was provided that Kendra and Hanna were not involved. I wanted to protect our daughters, who were struggling to cope with their dad’s death. I also wanted to protect Kathy because I knew her Seahawk sticking was done in the spirit of celebrating Mike’s love for the Superbowl and the Seahawks. No one ever asked me, Kendra or Hanna who had put that Seahawk’s sticker on Mike’s gravestone. But I went out of my way several times to explain how and why it was not possible that Kendra and Hanna could have done the sticker sticking.

Mike’s gravestone was never intentionally or unintentionally vandalized by Kathy. No damage was ever done to the gravestone. I personally went to inspect the gravestone right after a formal complaint was issued (by another) to the cemetery management. I took pictures to document the lack of damage immediately after the complaint was made to the cemetery management. There was notta, no darkening of any kind, not even a hint of damage. I did see the other individual’s photos and, after comparing them to my own photos and what I saw, I determined the other photos had to have been doctored. Both sets of photos were taken within one day of each other. The cemetery management agreed to uninstall that gravemarker and ship it off for professional power washing on their dime, even though it wasn’t necessary.

Kathy died in 2018 and we really hope she got to be reunited with her older brother, Mike. She never accepted Mike’s death the way it was told, never got over Mike’s death, and I believe she died of a broken heart.

Kathy and I shared over 200 pages of Facebook instant messages from April 2014 – June 2018. Most of those pages talked about Mike. And, yes, Kathy did write about putting the sticker on Mike’s gravestone. I treasure all that time I spent with Kathy. And I know she would now want all of you to know that she was the one who stuck that sticker on her brother’s gravestone. And we love her for her wacky, beautiful personality and for all that she did for her brother and his daughters.

So now you know the truth behind the Superbowl sticker on Mike’s gravestone!

Coming soon: Kathy’s complaint emails, which she gave me permission in advance to “share away,” “I want everyone to know,” she said. 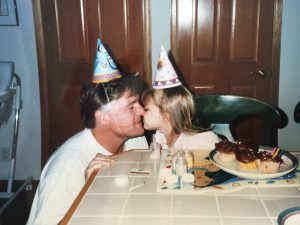